I’ve been tagged by Erik Weibel of This Kid Reviews Books in the chocolate challenge blog tour. Below are some of my favorite books, and the perfect chocolates to eat while reading them. At the end of my post, I’ll be tagging Wallace Books, one of the best local bookstores in the country, located right here in Portland, Oregon.

Sideways Stories From Wayside School is a zany book by Louis Sachar. The story is full of confusing humor that will make you think and laugh. You will find Mrs. Gorf, who turns children into apples, Bebe, the fastest artist in the class, John, who can only read upside down, Mauricia, who loves ice cream, and many more funny kids in Mrs. Jewls’ class.

I don’t know why, but Lindt Chocolate Balls just confuse me. It’s a mystery as to what’s inside the chocolate balls. I never know until I bite into one if it will be hollow, gooey or solid, and who knows how to take a bite of a round ball of chocolate anyway? (Awkward!) Same with Sideways Stories from Wayside School. I’m never sure what will be inside, or what to make of the crazy stories. But I do know one thing – chocolate balls and Sideways Stories are both delicious. 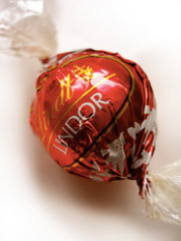 Nathan Hale’s Hazardous Tales: The Donner Dinner Party is a dark humored non-fiction graphic novel told by Nathan Hale, and written by Nathan Hale (two different guys, same name). Nathan Hale (the one telling the story) is about to be hanged, but he delays the process by telling the hanger and the soldier funny (but true) stories that happen in the future. In this book, he is telling a dark-humor version of the Donner Party. This is the legendary story about pioneers who try to get over the mountain pass to California before the winter snow storms arrive, and most don’t make it. The actual story is a tragedy, but the humor makes up for it in this graphic novel.

The dangers of the story remind me of the tangy raspberry in Divine, Dark Chocolate Raspberry. Danger: tangy, Tangy: danger. Also, the dark humor reminds me of the “dark” in the chocolate. And the Donner Party needed raspberry chocolate. Badly.

The Big Book of Superheroes by Bart King is a super funny book about how to be a superhero and the history of some already known superheroes. The book tells readers the small steps they can take to become a superhero, like picking a name, a list of the worst superhero names, parkour (which my next-door neighbor does everywhere!), how to get your powers, how to not die while getting your powers, and much more.

This book reminds me of the chocolate fudge from Sweets Handmade Candies, my favorite candy store in Old Town Truckee, Tahoe. When I buy that fudge, I think “victory!” like a superhero. 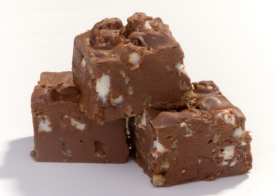 Sisters Grimm: The Problem Child is about two sisters, Sabrina and Daphne Grimm, who live with their grandma and the grandma’s friend Mr. Canis, also known as the big bad wolf. Sabrina Grimm found her uncle that nobody actually knew about and asked him for help with her sister and grandma and Mr. Canis to help to defeat Red Riding Hood and the Jabberwock. In the real story, Red Riding Hood was sent by her parents to her grandma’s house but before she could get there, the Big Bad Wolf had killed and eaten her grandmother. When she got there, the wolf had driven Red Riding Hood insane and the woodsman had to save her from the wolf. Red Riding Hood had broken out of the insane asylum and was now working with Jabberwock.

I’m now tagging Wallace Books to continue the chocolate challenge tour! I can’t wait to see which books a whole bookstore will pick to pair with delicious chocolates.